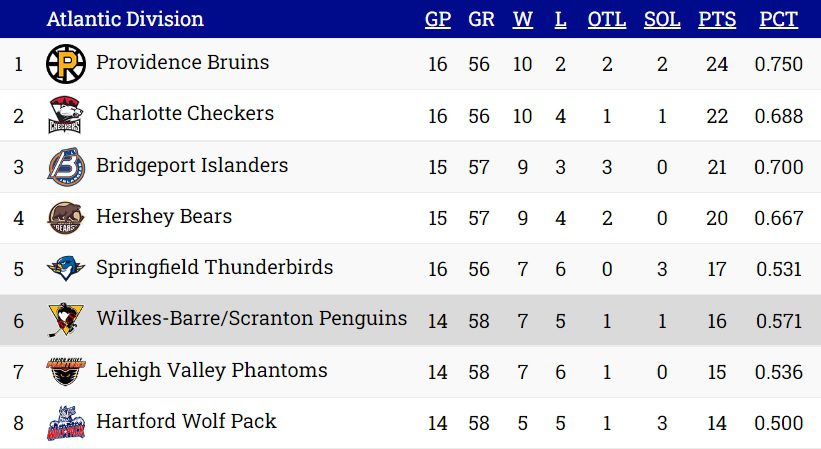 Friday, Nov. 18 – PENGUINS 4 vs. Hershey 0
Wilkes-Barre/Scranton got back in the win column by shutting out their bitter rival. The Penguins received goals from four different players, and Dustin Tokarski held down the fort for his 28th career shutout.

Saturday, Nov. 19 – PENGUINS 2 at Bridgeport 4
In their first matchup of the season, the Penguins lost a close one to the Islanders after a pair of power-play goals kept Bridgeport in the game. Ty Smith and Sam Poulin lit the lamp for Wilkes-Barre/Scranton, but an early, third-period strike and an empty netter provided separation for Bridgeport.

Wednesday, Nov. 23 – PENGUINS at Charlotte
The Pens and Checkers rematch for a Thanksgiving Eve special. Charlotte has played in a league-high seven overtime games this season, including four shootouts this month.

Friday, Nov. 25 – PENGUINS vs. Lehigh Valley
Wilkes-Barre/Scranton returns home to take on its PA Turnpike rival. The Pens are 1-0-1-0 against the Phantoms this season.

Saturday, Nov. 26 – PENGUINS at Springfield
The Penguins will experience a quick turnaround from Friday by busing up to Massachusetts to complete their six-in-nine stretch. The Thunderbirds won the only previous meeting this season, 3-2, on a goal by former Penguin Anthony Angello.

– Dustin Tokarski leads all AHL goalies with a 1.65 goals against average, and his .940 save percentage ranks second overall.

– Nine of the Penguins’ 14 decisions have been decided by a one-goal margin.

– Lukas Svejkovsky will celebrate his 21st birthday on Wednesday.