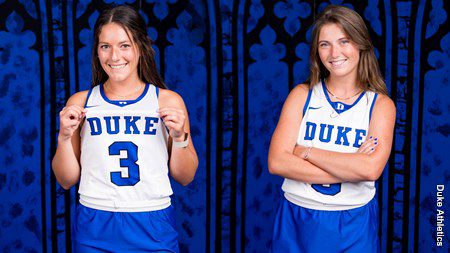 This is the second all-region selection for Miller and van Oirschot with Miller capturing second-team honors in 2019 and van Oirschot picking up All-West Region accolades while playing at Louisville in 2020-21.

The Blue Devils have had at least one all-region pick all but two years since their first All-South Region pick in 1985. Duke has landed at least two players on the all-region squad in 34 of the 37 years.

Duke’s offensive leader, Miller paced the Blue Devils in 2022 with seven goals and 11 assists for a career-high 25 points. Her 11 overall assists and 0.61 per game average ranked second in the ACC and 17th nationally. A starter in every game of her career as a Blue Devil, Miller registered at least three points in five games this year and had a career-best six in a win at Longwood.

The native of Malvern, Pa., currently ranks tied for 21st on the Duke career lists for points (69) and 24th in goals (25). She is one point away from becoming the 21st player in Duke field hockey history to amass 70 career points.

In her first year as a Blue Devil after transferring from Louisville, van Oirschot has been the engine to the Duke midfield. Playing nearly every minute for Duke, van Oirschot was third on the team in scoring with five goals and three assists for 13 points.

She registered two goals, including the game winner, and five points overall in a win at Colgate. The Haarlem, Netherlands native also netted the overtime winner against Appalachian State, taking a pass from Miller and hitting the back of the cage. Instrumental in Duke’s defensive effort in the midfield, van Oirschot also was a crucial piece to the Blue Devils’ offensive penalty corner team, providing dangerous redirects in front of the goal.

The Blue Devils finished the year with a 7-11 overall record and played their best field hockey down the stretch. Duke gave up eight goals in the final seven contests (1.14/game) of the season after allowing 20 in the first 11 contests (1.82/game).