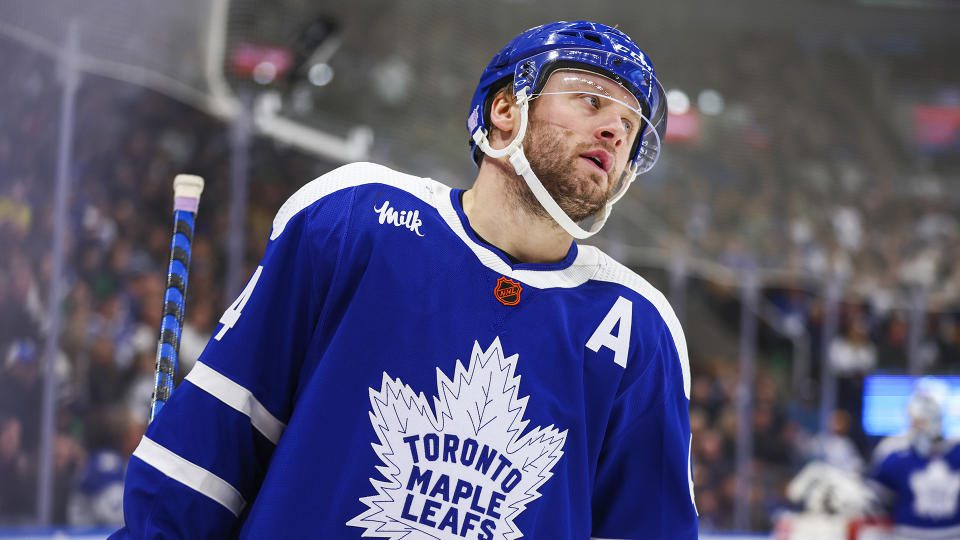 The Toronto Maple Leafs defence corps took another big hit on Tuesday as the club placed Morgan Rielly on long-term injured reserve with a knee injury.

The move means Rielly will miss at least 10 games and 24 days of action.

Rielly appeared to suffer the injury in the third period of Monday’s game against the New York Islanders when he collided with Kyle Palmieri. Rielly was slow to get up and clutched his left knee but logged another shift before exiting the game.

Rielly’s absence is just the latest blow to a Leafs blue line that is already missing Jake Muzzin (spine, out indefinitely) and T.J. Brodie (oblique, out at least another four games).

“It’s tough,” Leafs coach Sheldon Keefe told reporters after Monday’s game. “We’re already missing guys, and Morgan is so important to our team and to our back end in particular.

“His No. 1 asset is being able to move that puck, whether it be defensively or offensively,” Giordano said. “He’s always up there as one of the top [defencemen] in the league in my mind.”

Rielly has been held without a goal in 2022-23 but has recorded 16 assists through 20 games while logging 23 minutes per night.

The 28-year-old signed an eight-year, $60-million contract extension last October. Placing him on long-term injured reserve gives the Maple Leafs some financial flexibility should they seek to fill the hole on the blue line through trade.

In the meantime, Toronto recalled defencemen Mac Hollowell and Victor Mete from the AHL’s Marlies, with both players potentially in line to take on a greater role.