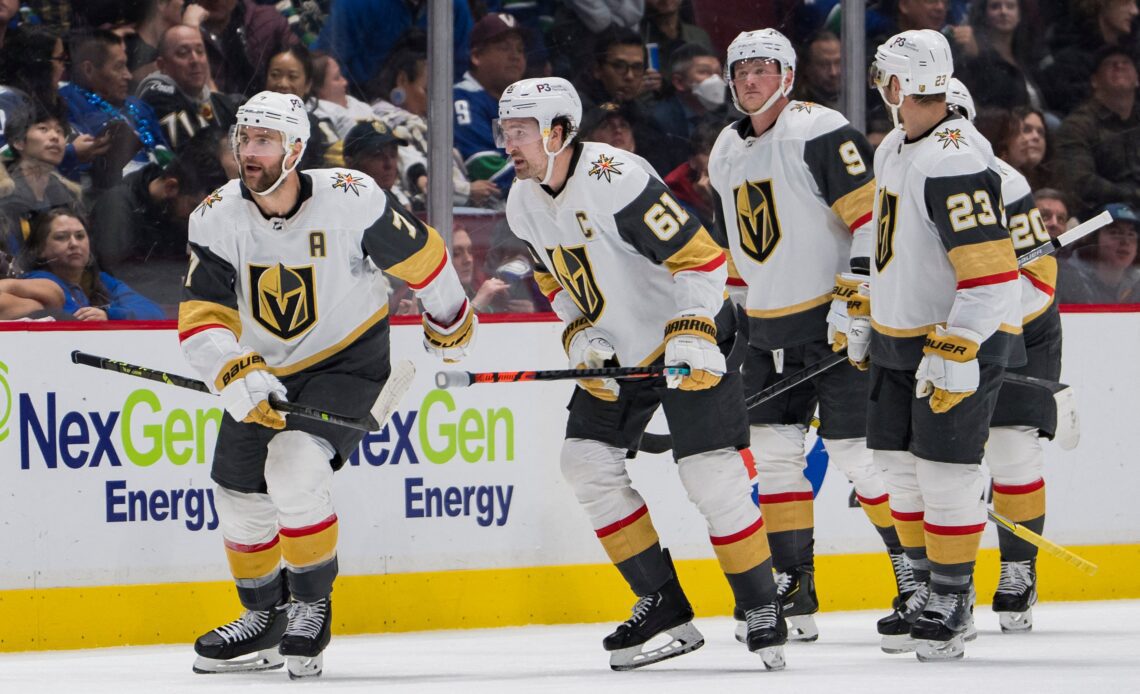 Alex Pietrangelo scored and notched a pair of assists as the Vegas Golden Knights topped the Vancouver Canucks 5-4 in an offensive firestorm Monday.

William Carrier put away a pair of goals for the Golden Knights (15-4-1) while Mark Stone scored and contributed a helper. Reilly Smith also found the back of the net for Vegas, and Jack Eichel and Alec Martinez each had two assists.

The Canucks (6-10-3) got a goal and an assist from Andrei Kuzmenko. Bo Horvat, Luke Schenn and Elias Pettersson also scored and Quinn Hughes notched a pair of helpers.

Logan Thompson made 25 saves for Vegas and Vancouver’s Thatcher Demko stopped 33-of-38 shots.

Monday marked the seventh time this season the Canucks have given up a multi-goal lead in a loss.

The visitors held a 2-1 advantage heading into the third period, where the offence erupted for both sides.

Pietrangelo put away the game winner 14:14 into the final frame, collecting a puck from Stone and sending a backhanded shot past Demko from the low slow.

Down two goals in the third period, Vegas comes back to earn a 5-4 win over Vancouver with a game-winning goal from Alex Pietrangelo.

Another goal was disallowed after Stone sent a puck through Demko’s pads 10:08 into the period. Vancouver challenged, arguing the puck went out of play and after video review, officials agreed, saying it hit the lens of a camera in the corner before popping back out onto the ice.

There were no questions when Smith shovelled a puck into the Vancouver net 8:57 into the frame to tie the game at 4-4.

Carrier made it 4-3 with his second goal of the night 6:54 into the third, sending in a rebound from the top of the crease for his sixth of the season.

Thirty-three seconds earlier, Vancouver took a two-goal lead 6:11 into the final frame when Pettersson blasted a one-timer from the bottom of the slot. Thompson saved the initial shot but the Swedish centre crashed the net and poked the rebound in past the netminder.

Schenn fired a wrist shot from the boards 5:35 into the third and the puck ricocheted in off Golden Knights’ defenceman Nicolas Hauge to give the home side a 3-2 lead.

Horvat drew the Canucks even 1:47 into the frame with a wrist shot from the hash marks. The Vancouver captain has 15 goals on the season, the second most in the NHL behind Connor McDavid (16).