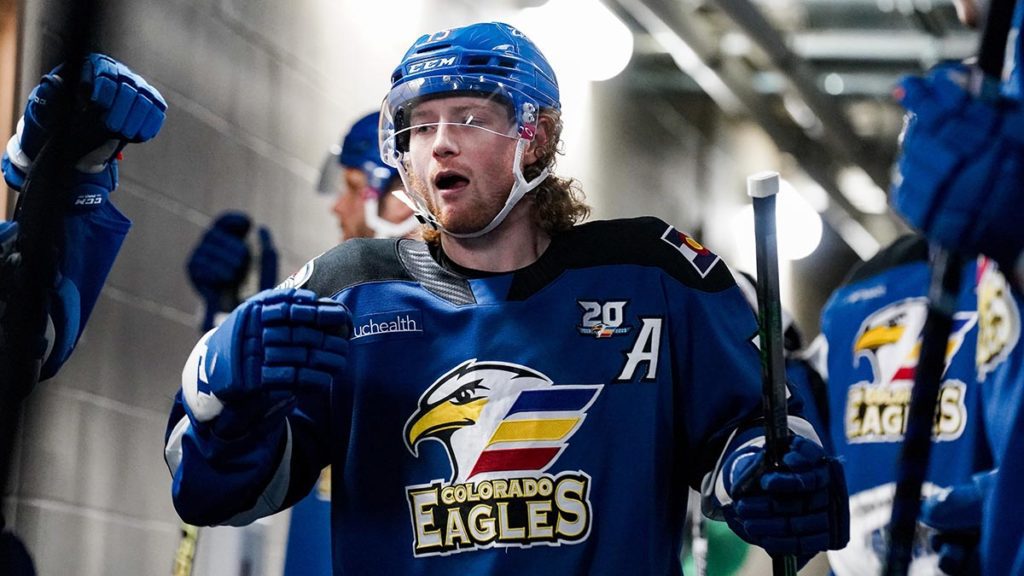 📝 by Nicole Boldrin | AHL On The Beat

Colorado Eagles forward Ryan Wagner had exhibited leadership qualities even prior to becoming an alternate captain and receiving an embroidered “A” on his sweater.

Wagner became an alternate captain during the 2020-21 season and is now in his third year in that role.

He believes his success as a part of the organization is largely credited to the Colorado coaching staff, which consists of head coach Greg Cronin and assistants Aaron Schneekloth and Tim Branham.

“The coaching staff has believed in me since the start,” Wagner said. “I kind of just bought in to the team’s system, the way we play here, and the culture which has allowed me to have the success that I have.”

Listening and taking feedback from Cronin has allowed Wagner to grow and develop as a player, both on and off the ice.

“I would attribute my confidence to the coaches,” he said. “I am a hard-working player who likes to be reliable. This is the biggest part of my game. I don’t score all the goals or all the pretty stuff, but if we’re winning games, I feel like I’m doing a good job.”

Wagner’s assertion that the organization is doing a great job of developing players is just one of the many reasons why the 26-year-old is grateful to be playing hockey for the Eagles.

“You see the success that players have when they get called up from here to the Avalanche, or even from Utah (ECHL) to here,” Wagner said. “They do a really good job at developing people. You can see that the guys that leave here like Kiefer Sherwood and Jordan Gross … had great success here.”

The Colorado Eagles earned a spot in the 2022 Calder Cup Playoffs, and Wagner scored four goals and added one assist in nine games as they reached the Pacific Division finals. Although the Eagles didn’t win the Calder Cup, Wagner was proud of his team’s performance and effort.

“We play a hard style,” he said. “We like to chip pucks in. We like to get pucks back. We are relentless which is overwhelming for other teams as we compete hard on both ends of the ice.”

Being an alternate captain has come with a lot of leadership responsibilities. Wagner leads by example, which consists of an abundance of positivity.

“I like to be positive to guys that are struggling,” he said. “I like to pick guys up, but I also like to lead by my actions by always doing the right thing whether that’s chipping pucks in, blocking shots or getting the boys up on…