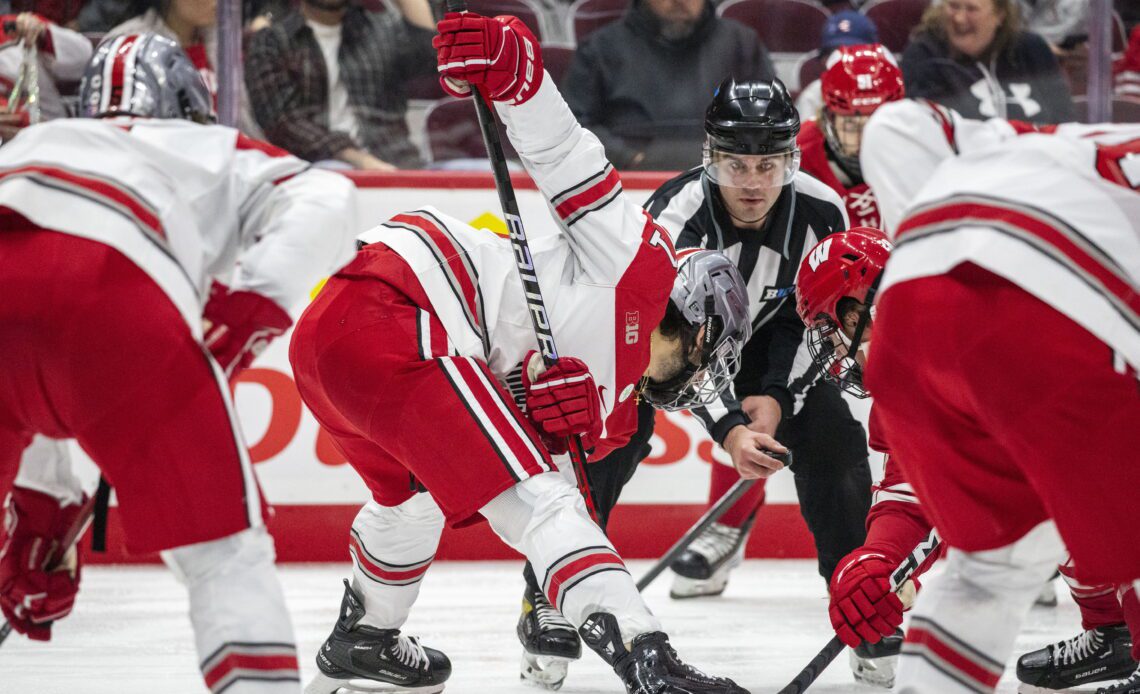 The No. 12 Ohio State men’s ice hockey team dominated the third period Friday, leading the Buckeyes to victory against No. 20 Notre Dame by a score of 5-2 at Value City Arena.

The Buckeyes were led by senior forward Tate Singleton, who knocked in a goal with 7:03 left in the third period to give Ohio State a 3-2 lead it would not relinquish again. On top of the go-ahead goal in the third, Singleton also finished the contest with a game-high two assists.

Following the win, Singleton emphasized the Buckeyes’ energy level, which helped propel them to the win.

“I think that’s my role sometimes is to bring energy,” Singleton said. “I thought I brought energy tonight and a lot of guys built off it. It’s hard to win in college hockey and to get one like that was pretty nice.”

The Buckeyes got on the board first when freshman forward Davis Burnside scored only 4:18 into the game. The first goal by Burnside was assisted by senior defenseman Scooter Brickey, as well as Singleton.

With 44 seconds remaining in the first period, the Fighting Irish tied the game up at one thanks to a score by senior forward Trevor Janicke heading into the first intermission.

The Notre Dame momentum continued into the second period, where it tacked on yet another even-strength goal behind a score from freshman forward Fin Williams to take a 2-1 lead.

Head coach Steve Rohlik had high praise for the Buckeyes’ penalty kill, where they shut down all five of the Fighting Irish’s power play chances.

“You work at it a lot,” Rohlik said. “It comes down to special teams a lot and you saw that again tonight.”

Following a slashing penalty on freshman defenseman Tyler Duke, senior defenseman Dominic Vidoli knotted the game up at two with a short-handed goal assisted by Singleton, which took them into the second intermission.

Rohlik said the goal scored by Vidoli was a major turning point in the game.

“It was the short-handed goal that really started to get us going to even up the game,” Rohlik said. “We kind of struggled through those first couple periods, but yet we were right there and I think that was the most important thing.”

With goals by Singleton, fifth-year forward Jake Wise and junior forward Patrick Guzzo, the Buckeyes offense exploded in the third period which helped them seal the deal.