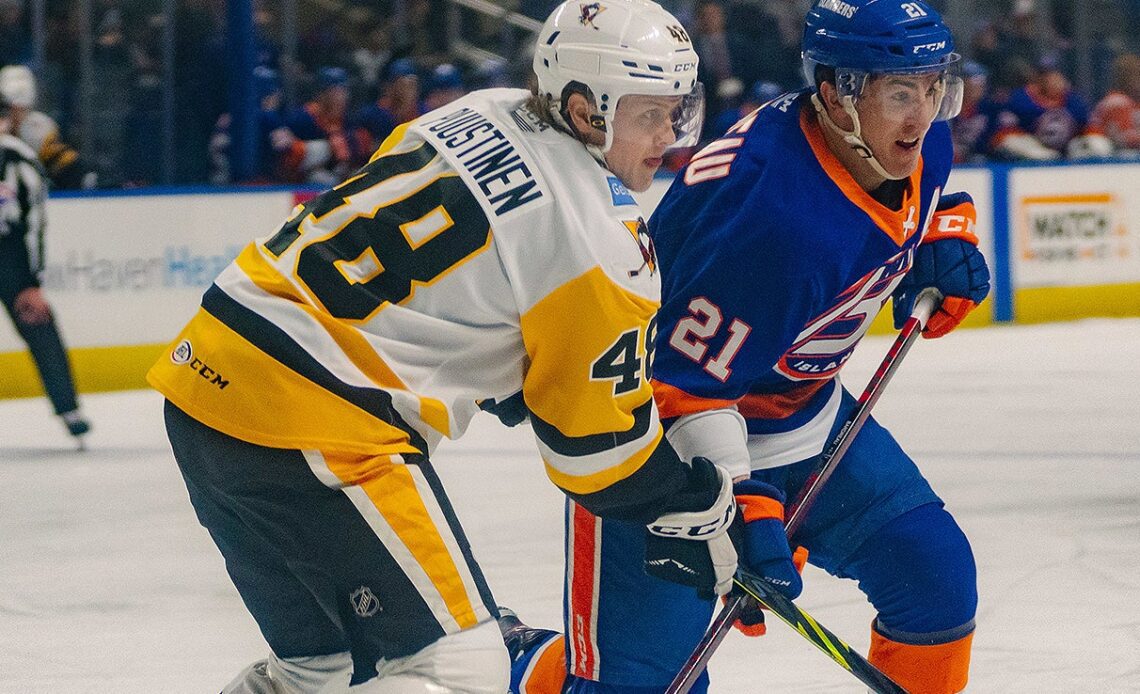 THE STORY COMING IN

The Bridgeport Islanders (7-3-3-0) look to get back on track and snap a four-game skid (0-2-2-0) as they host the Wilkes-Barre/Scranton Penguins (7-4-1-0) at 7 p.m. tonight inside Total Mortgage Arena. Last night, the Islanders outshot the Charlotte Checkers 39-18 and Hudson Fasching scored his sixth goal of the season, but it wasn’t enough in a 4-1 setback to open the weekend. Trevor Cosgrove had four shots in his AHL debut and Nikita Soshnikov recorded one shot. Despite the setback, Bridgeport has points in 10 of its last 12 games and ranks fourth in the Atlantic Division standings.

Tonight is “Hockey & Hops,” featuring a pre-game beer tasting event from 4:30 p.m. to 6 p.m. on the Total Mortgage Arena concourse. Try some of the best beer in Connecticut with many local breweries in attendance. Packages are still available online and at the Yale New Haven Health Box Office, which include access to the pre-game party, a ticket to tonight’s game, a Bridgeport Islanders tasting glass and koozie.

GAME AT A GLANCE

Tonight’s game is the first of six meetings between the Islanders and Penguins this season, and the first of three in Connecticut. Bridgeport went 2-4-0-0 against Wilkes-Barre/Scranton in 2021-22, but was 2-1-0-0 in those games at home including back-to-back wins on Mar. 4th and 5th. The division rivals last met on Apr. 16th in Pennsylvania, where Simon Holmstrom had three points (two goals, one assist) in a 6-5 loss. All six meetings last season were decided in regulation.

The fifth-place Penguins snapped a four-game slide with a 4-0 win against the Hershey Bears at home last night. AHL Goaltender of the Month for October, Dustin Tokarski, was magnificent with 26 saves, while four different players found the net including Drake Caggiula’s first as a Penguin. Tokarski leads the AHL in goals-against-average (1.38) and save percentage (.948) in eight outings. Wilkes-Barre/Scranton leads the league in fewest goals allowed (25).

Hudson Fasching scored his sixth goal of the season at 10:00 of the first period last night, tying him for the team lead with Andy Andreoff. All six of his goals have come at even strength. Fasching has three goals in his last three games including a two-goal performance in Hershey on Nov. 11th. The…