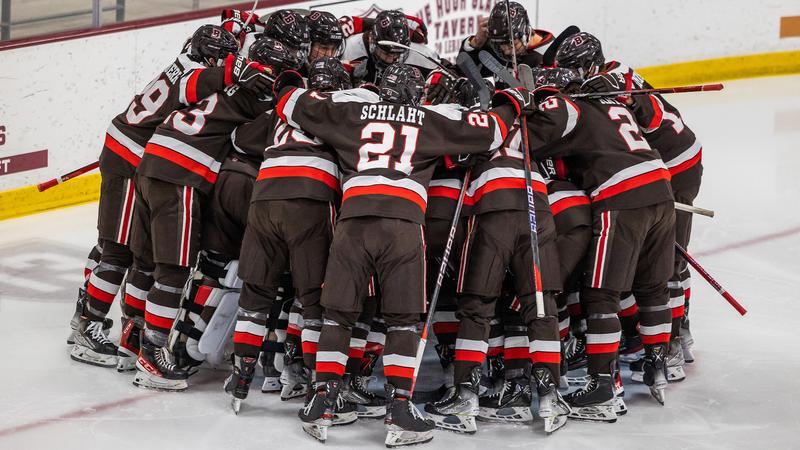 After killing an early penalty, Cornell took the lead 3:13 into the first period with Jack O’Leary finding the back of the net. Kyle Penney and Sam Malinski assisted on O’Leary’s second of the season.

Matt Sutton evened the score 6:12 into the first with Brown’s first short-handed goal of the season. The sophomore skated into the Cornell zone with speed and deked around the last Big Red defenseman with a toe drag before ripping a shot past Remington Keopple (17 saves).

Matt Stienburg gave Cornell a 2-1 lead with 5:07 remaining in the first, finishing a feed from Gabriel Seger on the Big Red’s second power play of the frame.

Jack Lagerstrom made it 3-1 for Cornell 2:46 into the second period, wiring a shot from the top of the left circle past goaltender Mathieu Caron (34 saves).

Ryan Bottrill had a scoring chance 5:30 into the second after a Cole Quisenberry takeaway below the goal line, but Keopple made the save and held for the whistle.

Seconds after Keopple robbed Ryan Shostak of a goal, Winter Wallace finished a net-front scramble to make it 4-1 Big Red with 9:09 remaining in the second.

Penney added Cornell’s second power play goal of the night at 11:38 of the third to make it 5-1.

Brown returns home to take on the Holy Cross Crusaders (2-10-1, 2-7-1 AHA) in the first non-conference action of the season on Friday (Nov. 25). Friday’s game is scheduled to begin at 2 p.m. and will stream on ESPN+. Click here to purchase tickets.

The Brown University Sports Foundation (BUSF) is the lifeblood of the athletics program and exists to enhance the student-athlete experience through philanthropic support from alumni, parents, fans, and friends. A gift through the Sports Foundation immediately impacts today’s Brown Bears and helps them to be their best in the classroom, in competition, and most importantly in the community….