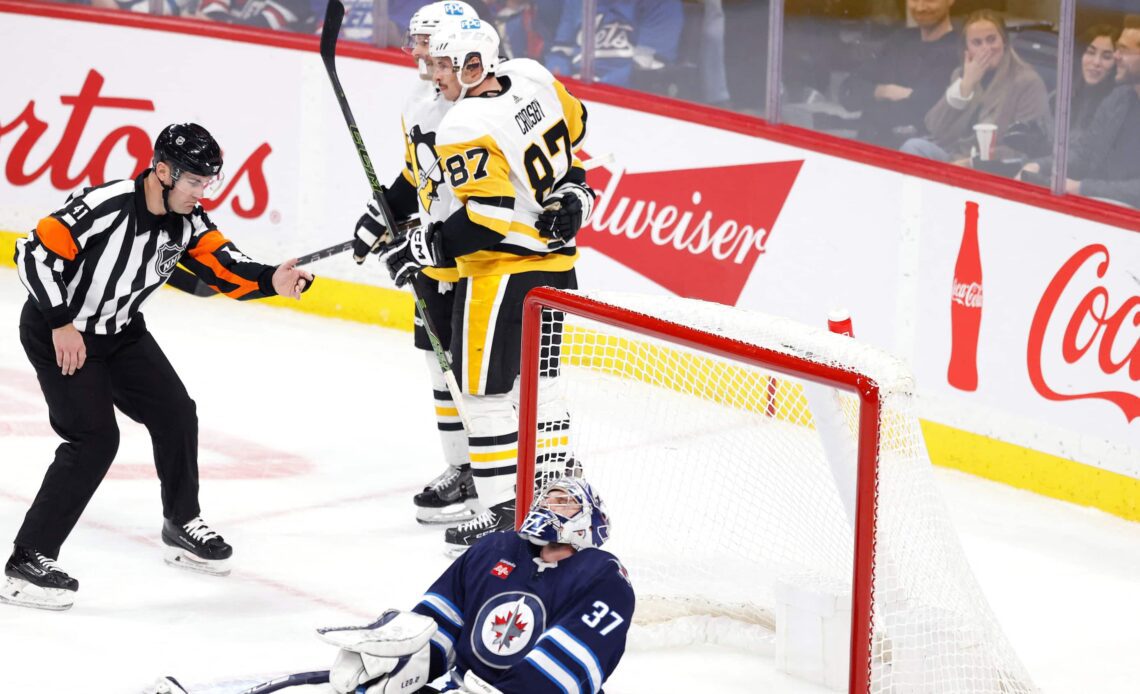 Tristan Jarry stopped all 32 shots he faced leading the Pittsburgh Penguins to a 3-0 victory over the Winnipeg Jets on Saturday night.

Rust salted the game away after Jets netminder Connor Hellebuyck surrendered the puck to Penguins forward Sidney Crosby, who promptly set up Rust and the right-winger capitalized. Guentzel added an empty-net marker with 3.5 seconds left.

After a scoreless first two periods, Zucker opened the scoring 53 seconds into the third. The left-winger took a pass from Evgeni Malkin and beat Hellebuyck over his shoulder.

The Jets held a 23-22 shot advantage through the first 40 minutes as both goaltenders held down their respective forts. Hellebuyck made a solid save on Pittsburgh’s Ryan Poehling in addition to some quick stops on screened shots.

Josh Morrissey and Cole Perfetti both came close to opening the scoring for Winnipeg during a pair of power plays in the second, but were stoned by Jarry.

Connor Hellebuyck turned the puck over late to Sidney Crosby, who set up Bryan Rust for the insurance marker, as the Pittsburgh Penguins went on to shut out the Winnipeg Jets 3-0.

Although the Jets outshot Pittsburgh 13-11 in the first, the Penguins held the edge with more threatening scoring opportunities in the early going.

Hellebuyck was forced to be sharp facing dangerous shots from Guentzel, Kris Letang, Malkin and Rickard Rakell. Hellebuyck also stopped Crosby on a partial breakaway after the star took the puck away from Morrissey.

The Jets announced that veteran forward Nikolaj Ehlers is scheduled for a hernia operation and will be out of action. Ehlers, who only played two games this year, is the third forward that Winnipeg has lost to injury this season. The others are Mason Appleton and Morgan Barron, both with wrist injuries.

With four points against Minnesota on Thursday,…