Doan and Mastrosimone Combine for Four Points in Loss to Clarkson 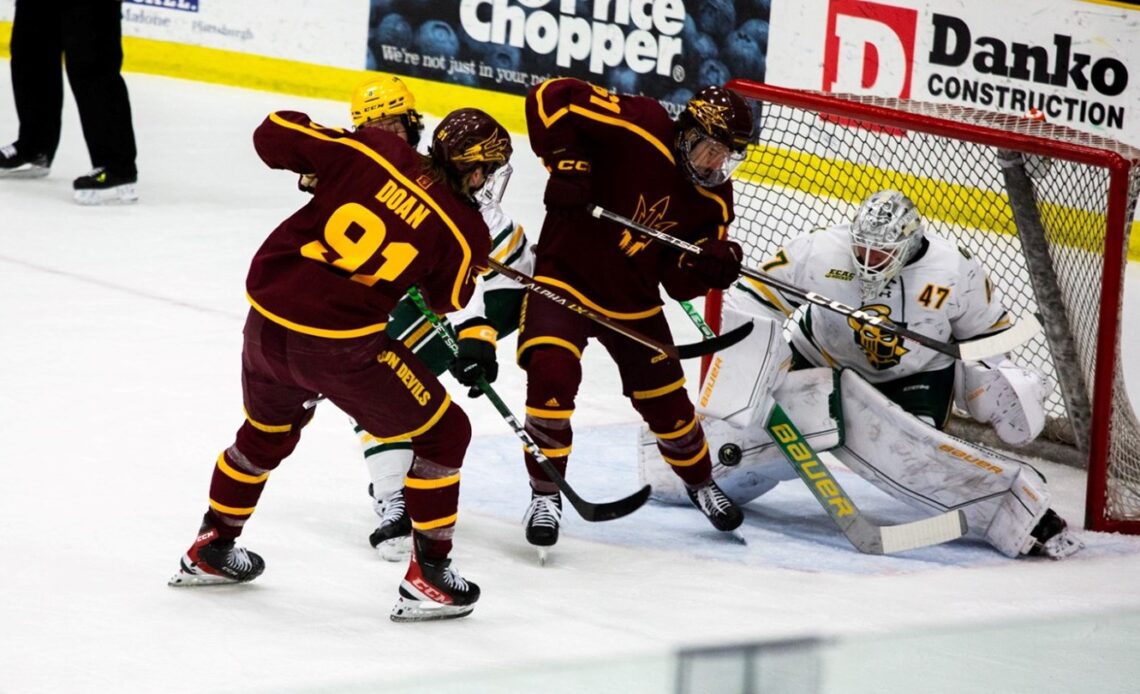 POTSDAM, N.Y. – Arizona State hockey captain Josh Doan extended his point-scoring streak to four games with a goal and assist against Clarkson University on Saturday night. One of the largest Nor’easters in New York State history rammed the North Country and snuffed out the desert heat as ASU eventually suffered a series sweep after falling to CU, 5-3, at Cheel Arena.

Along with Doan, Dylan Jackson and Lukas Sillinger scored goals for ASU. Doan and Sillinger are tied for second-most goals on the team this season with four each. Mastrosimone tallied two assists on the night to tie for ASU’s lead in total points with Doan at 12 through 13 games.

Next up, ASU returns to Mullett Arena to host No. 2 Minnesota over Thanksgiving Weekend on November 25-26.

On the same note as Friday, the penalties ensued shortly after puck drop at Cheel Arena on Saturday night. ASU enjoyed a power play opportunity just over six minutes into the matchup but was unable to find the back of the net.

The tides turned as Dylan Jackson scored his second goal as a Sun Devil to give ASU the early 1-0 lead at 11:57. He was assisted by his identical twin, Ty, and Tim Lovell.

The Sun Devils led the shot chart through the first frame with 11 to CU’s seven.

ASU went on to kill back-to-back penalties, including one that bled into the second period, marking 16 consecutive penalty kills. The Sun Devil PK squad squashed the Golden Knights efforts during the first kill, never allowing them to get off a shot.

Both teams battled to ignite their offenses through the first 10 minutes of the period and Clarkson’s caught on like a match. The Golden Knights eliminated the Sun Devil lead with a goal at 8:42 to tie the game, 1-1.

ASU came out of the gates hot, scoring the game-tying goal just three minutes into the period. Lukas Sillinger scored with assists from Robert Mastrosimone and Josh Doan. With the assist, Doan extends his point scoring streak to four games (1G, 4A).