Three-Goal Third Lifts No. 12/13 Buckeyes to Win over No. 20 Irish – Ohio State Buckeyes 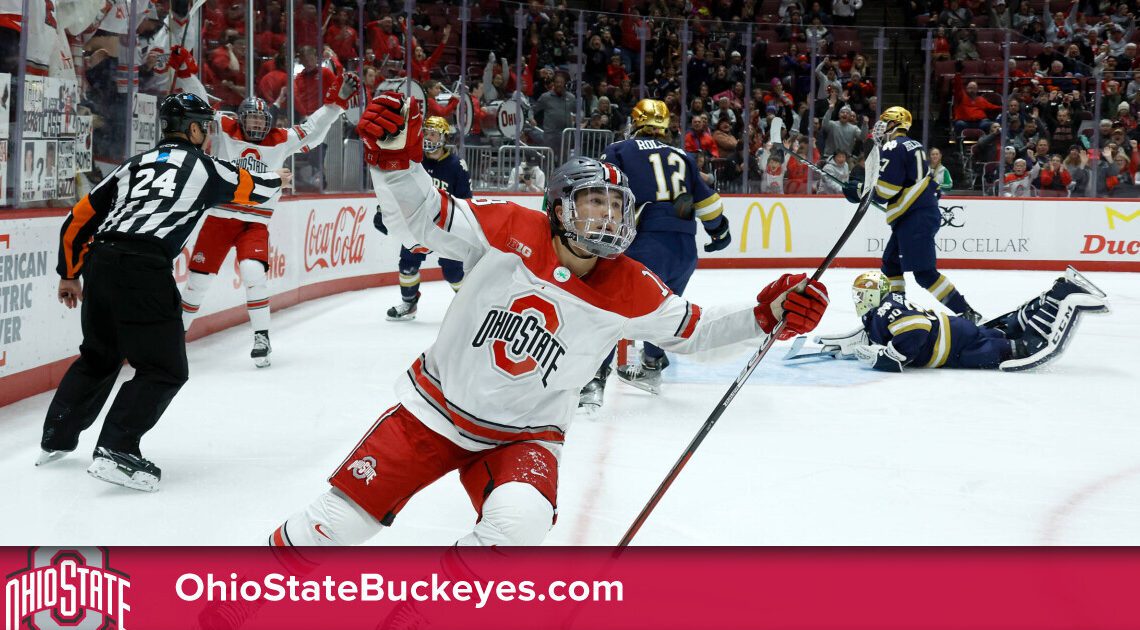 COLUMBUS, Ohio – With the game’s final four goals, the No. 12/13 Ohio State men’s hockey team defeated No. 20 Notre Dame, 5-2, in a Big Ten Conference game Friday in Value City Arena. Tate Singleton led the Buckeyes with three points, including the go-ahead goal in the third period.

Ohio State’s Davis Burnside opened the scoring at 4:18 but the Irish deadlocked the game in the final minute of the opening stanza. Notre Dame scored early in the second and Buckeye Dominic Vidoli answered with a shorthanded goal less than four minutes later. The game remained tied until 12:57 of the third, when Tate Singleton finished a 2-on-1 with Burnside. Just 76 seconds after Jake Wise converted on the power play for a two-goal cushion and Patrick Guzzo added an empty net tally at 18:04 for the 5-2 final. Ohio State, which was outshot 32-26, was 5-for-5 on the penalty kill in the game and 1-for-4 with the man advantage.

The Buckeyes, now 8-4-1 on the year and 4-3-0-0-0-0 in the Big Ten, and Irish (5-6-2, 2-4-1-1-0-0) will close the weekend series at 5 p.m. Saturday in Value City Arena. There will be a free postgame skate (fans must bring their own skates; register HERE). Saturday is a Military Appreciation game and active military and veterans can receive two free tickets online through Vet Tix or at the arena ticket window on game night.

Season, single-game and group tickets and mini plans are all on sale now, with more information on OhioStateBuckeyes.com/tickets. Parking is free for all home games in VCA.