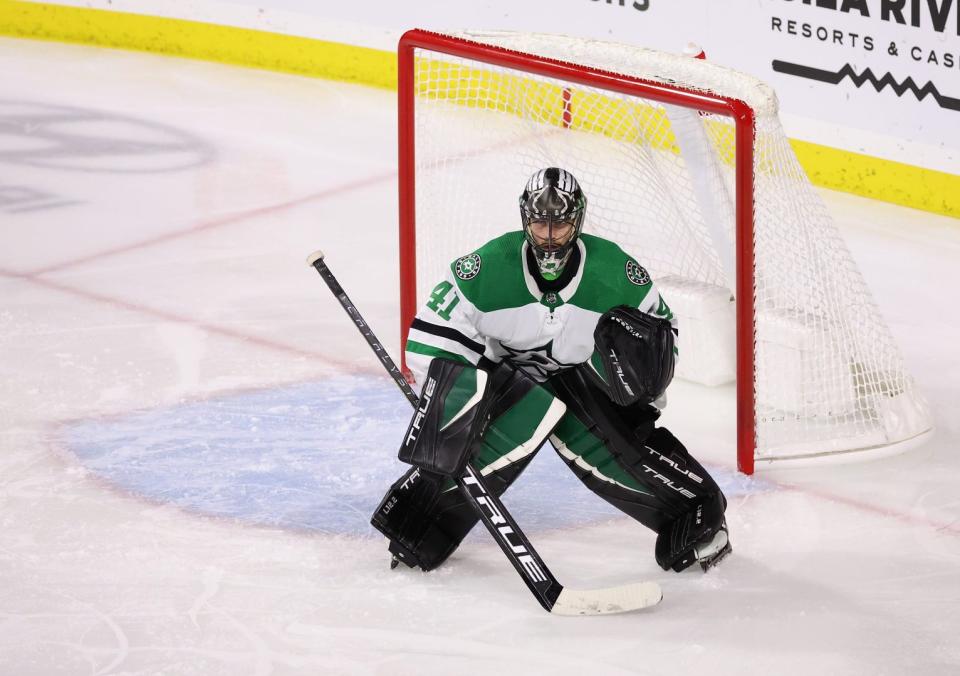 SUNRISE, Fla. – The Dallas Stars scored four goals in the first period and held off the Florida Panthers 6-4 on Thursday night despite losing starting goalie Scott Wedgewood to injury.

Wedgewood was carted off the ice by paramedics not long after making a save on Anton Lundell in the second period.

Roope Hintz scored his first of two goals 4:58 into the game before teammates Nils Lundqvist, Jamie Benn and Tyler Seguin all scored to close out the opening period.

The Panthers, playing without captain Aleksander Barkov due to an undisclosed illness, had goals from Carter Verhaeghe, Eetu Luostarinen, Sam Reinhart and Matthew Tkachuk.

After being attended to by Dallas medical personnel, paramedics were called onto the ice to put Wedgewood onto a backboard before placing him on a stretcher.

Wedgewood ended his night with 21 saves as the Stars held a 5-2 lead at the time of the injury.

Although there was no official update on Wedgewood’s condition from the team immediately following the game, Seguin said “his spirits seem a lot better now and it is nice seeing him walking around. I gave him a high-5.”

Wedgewood was treated at the arena and not taken to a hospital.

Coach Peter DeBoer classified it as an “upper-body injury” and said Wedgewood would fly back with the team and be evaluated there.

“Obviously you never like to see that,” DeBoer said. “We found a way to get the win and we’ll cross our fingers here and hope Wedgewood is okay.”

The Stars took control of the contest by scoring three goals in the final five minutes of the first period upon taking a 1-0 lead.

Seguin’s goal came with 8.3 seconds remaining and was the final shot Sergei Bobrovsky (7 saves) faced as he was pulled for Spencer Knight to start the second.

Florida got back into the game with three goals in the second period – although Hintz scored at 10:56 to help give the Stars a two-goal lead after 40 minutes.

“We have not had nights like that, starts like that in the first period so when that first period was done, you don’t have a lot of options,” Florida coach Paul Maurice said. “But it is hard to do what we did, to slowly start to grind and get stronger, start to push back.”

The Panthers cut the deficit to a single goal with 6:03 remaining when Tkachuk found the net. Dallas ended the comeback bid on Ty Dellandrea‘s empty-net goal with 17.9 seconds remaining.

“Great win, great road trip for us,” said DeBoer, whose team went 2-0-1 on this recent trip…