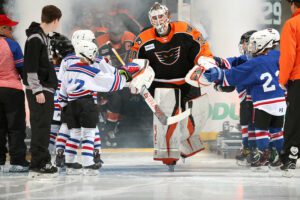 TONIGHT
The Lehigh Valley Phantoms open a four-game road-swing with a visit to the Providence Bruins in the first of a two-game weekend series. The Phantoms have won three straight including a pair of one-goal decisions last weekend over Springfield and Laval. Providence (10-1-2) has the best record in the AHL and carries a five-game winning streak into tonight as well as an eight-game point streak (7-0-1). This is the first of six meetings for the Atlantic Division foes in the 2022-23 season.

LAST TIME
Cam York scored the winner against the Laval Rocket for the second time in barely more than a week as the Phantoms won their third straight. Ronnie Attard and Elliot Desnoyers scored in the first two periods for a 2-0 lead but Laval rallied to even the score in the third. Just 90 seconds later came York’s blast with 11:22 remaining that held up as the game winner. York had scored in overtime at Laval the previous Saturday. Sam Ersson had 31 saves in the win.

TRANSACTIONS
The Phantoms have added NHL veteran center Artem Anisimov on a PTO and have received center Tanner Laczynski on loan from the Philadelphia Flyers.
Forward Max Willman has been recalled to Philadelphia from Lehigh Valley.
Goalie Pat Nagle has been recalled from the Reading Royals (ECHL) while goalie Nolan Maier was loaned by the Phantoms back to Reading.
Patrick Brown was briefly with the Phantoms on a conditioning loan but only participated in practices with the Phantoms before he was recalled by the Flyers and activated from injured reserve.

ARTEM ARRIVES
NHL veteran Artem Anisimov has joined the Phantoms on a PTO (professional tryout). The 34-year-old center signed with the Philadelphia Flyers in the preseason on a PTO but was injured on a blocked shot on September 24. Anisimov has played in 771 career NHL games with the New York Rangers, Columbus, Chicago and Ottawa scoring 180 goals with 196 assists for 376 points. The left-handed shooter has four seasons in the NHL scoring 20 or more goals. He has not played in the AHL since 2008-09 when he represented the Hartford Wolf Pack  at the AHL All-Star Classic and rated fourth in the league with 37 goals and fifth in points with 81.

EVERYDAY ERSSON
Sam Ersson has thrived as the team’s everyday goalie and carries a three-game win streak into the upcoming road trip. The Flyers’ fifth-round selection in 2018 has…