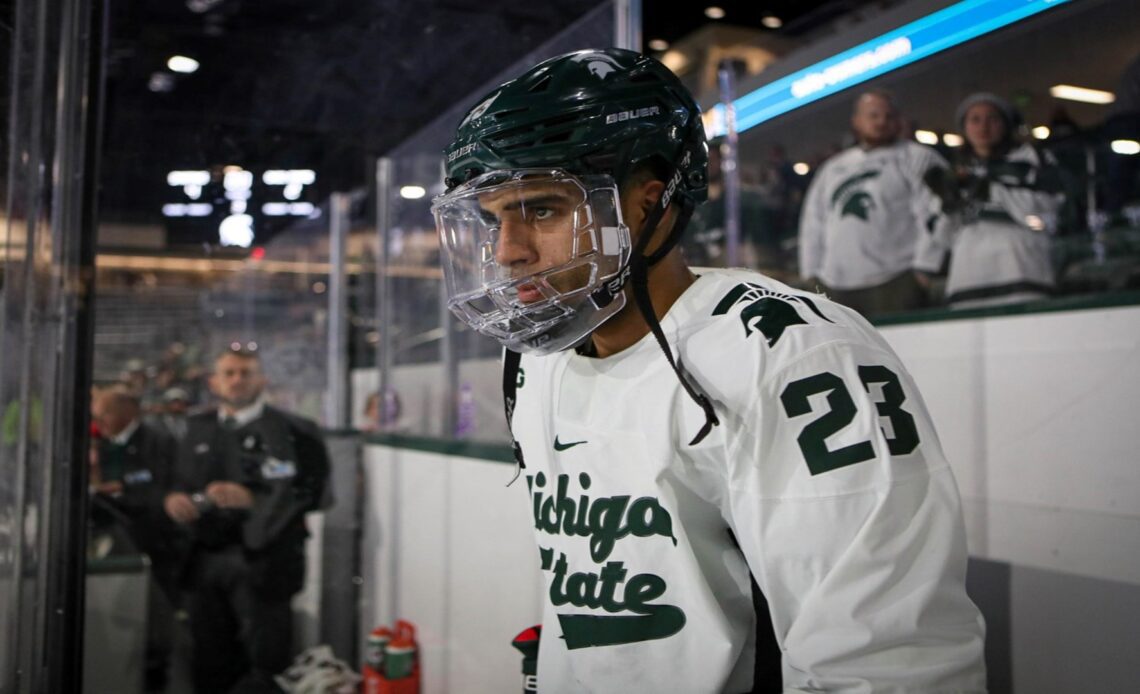 
The No. 6 Nittany Lions, trailing 3-2 after two periods, scored twice in the final six minutes to flip the script on the upstart Spartans, who held one-goal leads in each intermission.  The game-winner for the home team was scored at 19:04 by Tyler Gratton, who finally got one past Dylan St. Cyr after the netminder had stolen two grade-A chances from the senior earlier in the game.   The teams had the puck tied up along the left wall for an extended period, but the puck got free for Tyler Paquette, who found a solo Gratton in the right circle and he popped his third goal of the season.


Penn State (11-3-0, 5-3-0 B1G) opened the scoring at the midpoint of the first period on a goal by Jimmy Dowd Jr., but the Spartans countered with goals by Matt Basgall (just over two minutes after Dowd’s goal)  and Jagger Joshua (on the power play at 17:24) to take the lead into the first intermission.

Jagger Joshua makes this a 2-1 ballgame with his power play goal.  Sixth of the season and third on the PP. pic.twitter.com/OcAN5YyS5j

Penn State got the first of two goals from Christian Berger at the 16:22 mark of the second,  but Cole Krygier countered on the ensuing shift when he walked in off the wall and scored at 16:45 to regain the lead.

Penn State tied the game at the 14:23 when Berger scored his second of the night by knocking down a clearing attempt at the left point and threading it through traffic.  That set up the final five minutes, when the teams traded power play chances – the Nittany Lions stifled MSU on their third chance of the night but hit pay dirt in the final minute on Gratton’s game-winner.

The Spartans and Nittany Lions will wrap the weekend series with a game Saturday that begins at 7:30 pm.