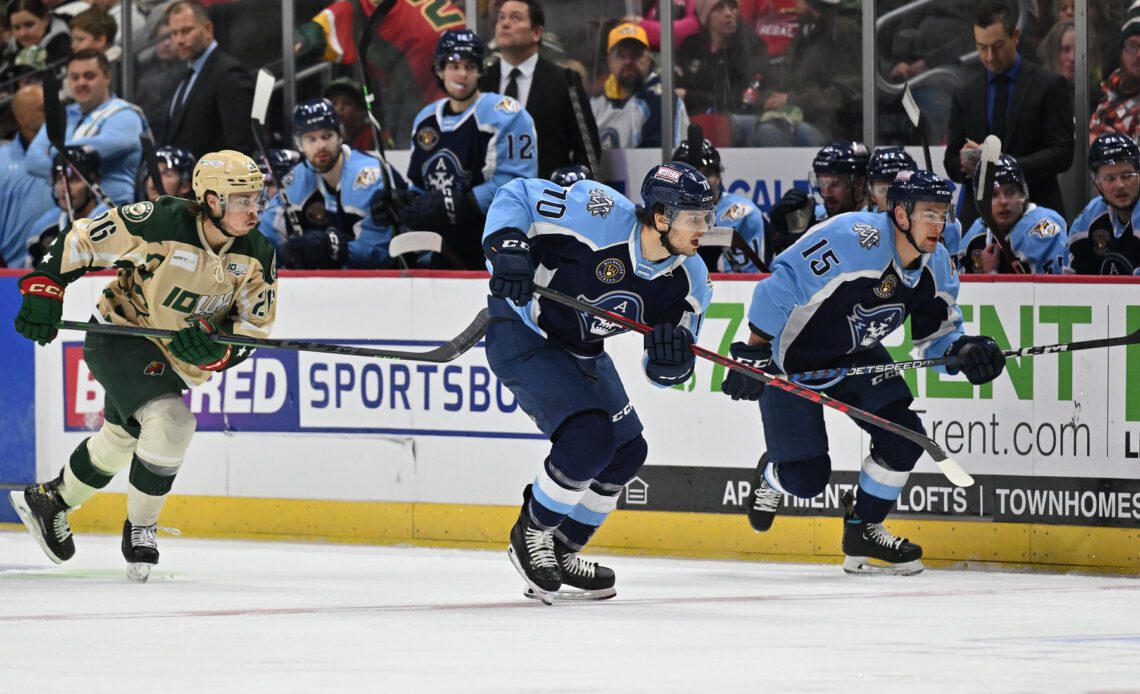 Kiefer Sherwood scored a pair of goals to lead the Milwaukee Admirals to a 6-1 win over the Iowa Wild Friday at Wells Fargo Arena.

The Admirals improved to 7-1-0-0 on the road in winning its sixth straight away from UW-Milwaukee Panther Arena. The loss snapped Iowa’s five-game points streak (4-0-1-0).

Milwaukee took a 1-0 lead at 8:36 of the first period. Tommy Novak skated on the right wing into the Iowa zone. Cole Schneider drove the middle and skated in front of Iowa goalie Jesper Wallstedt just as Novak shot from the right circle. Novak’s shot went inside the left post for Novak’s fifth goal of the season.

The Admirals stretched the lead in the second stanza. First, Tim Schaller scored after receiving a long pass from John Leonard. Schaller skated from the blue line to the right circle and roofed a backhander into the goal for his second goal of the year at 9:49.

Jimmy Huntington converted a turnover in front of the Iowa goal at 13:43 of the second period by slapping a loose puck into the net for his third marker of the season.

Iowa scored its first goal at 14:27 of the second period when Steven Fogarty tapped the puck past Milwaukee goalie Yaroslav Askarov from the front of the goal.

Milwaukee reclaimed a three-goal advantage at 18:07 of the second when Sherwood used a quick release to snap the puck from the right circle to the back of the goal for his fourth goal of the year.

Sherwood scored his second of the game, finishing off a passing play with Huntington, at 2:13 of the third period.

Just ten seconds after Sherwood’s goal, Jachym Kondelik scored his second of the season with an assist from Tommy Apap.

The Admirals and Iowa will both travel to Milwaukee for a return engagement Sat., Nov. 19 at Panther Arena.