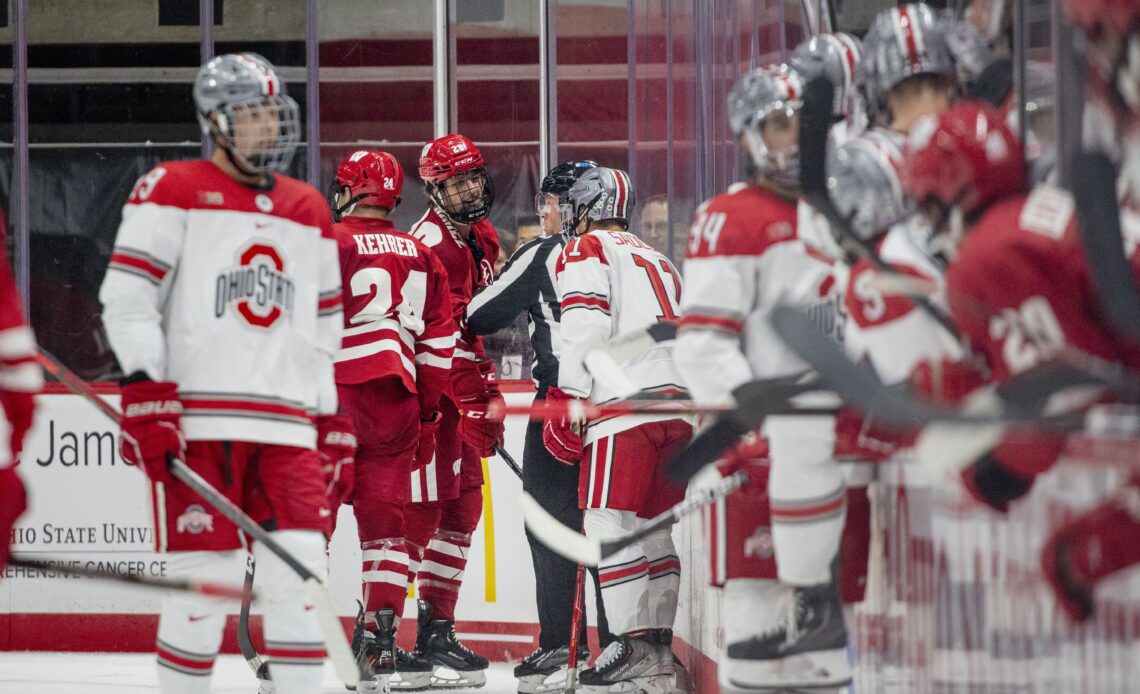 The No. 12/13 Ohio State men’s hockey team will take on No. 20 Notre Dame on Friday and Saturday in Columbus. Credit: Zachary Rilley | Photo Editor

The No. 12 Ohio State men’s ice hockey team looks to get back on track at home this weekend in a top-20 matchup with No. 20 Notre Dame after an unsuccessful trip to Michigan State.

The Buckeyes (7-4-1, 3-3 Big Ten) were swept on the road by the Spartans last weekend. Senior forward Tate Singleton said the two losses made the Buckeyes motivated to get back to the ice.

“You know, it’s tough to lose two on the road,” Singleton said. “We’re really looking forward to this weekend. We got a lot to prove in this weekend for sure.”

Singleton said the tough weekend against Michigan State has not caused the Buckeyes’ mindset to waver, and he believes it could serve as motivation for the rest of the season.

“I don’t think it dented our confidence. I think it was more of a wake-up call that anyone in the Big Ten can play,” Singleton said. “Anyone in college hockey can beat you, and if you don’t bring it, then you’re going to be on the wrong side of the score.”

Last season, the Fighting Irish went 28-12, including 17 wins in the Big Ten with a 2-2 record against Ohio State.

Notre Dame (5-5-2, 2-3-1 Big Ten) comes into this weekend’s matchup off a set split against Michigan in South Bend, Indiana.

Despite having two 10-point scorers, Notre Dame is struggling offensively this season, holding the second-lowest goals scored per game in the Big Ten at 2.33. The Fighting Irish are last in the conference in shots on goal per game at 29.83, the only Big Ten team averaging less than 30.

The Irish are also struggling on defense, allowing 2.83 goals per game, the second-worst in the Big Ten. Despite conceding goals, the Irish block the second-most shots in the Big Ten at 13.17.

Notre Dame’s biggest struggle this season is on special teams. The Irish post the third-worst power-play percentage in the Big Ten at .171, the worst penalty kill percentage at .733 and give up the second-most penalty minutes per game, spending over 14 minutes in the penalty box per game.

A strength Notre Dame has shown this season is its goaltending. The Fighting…