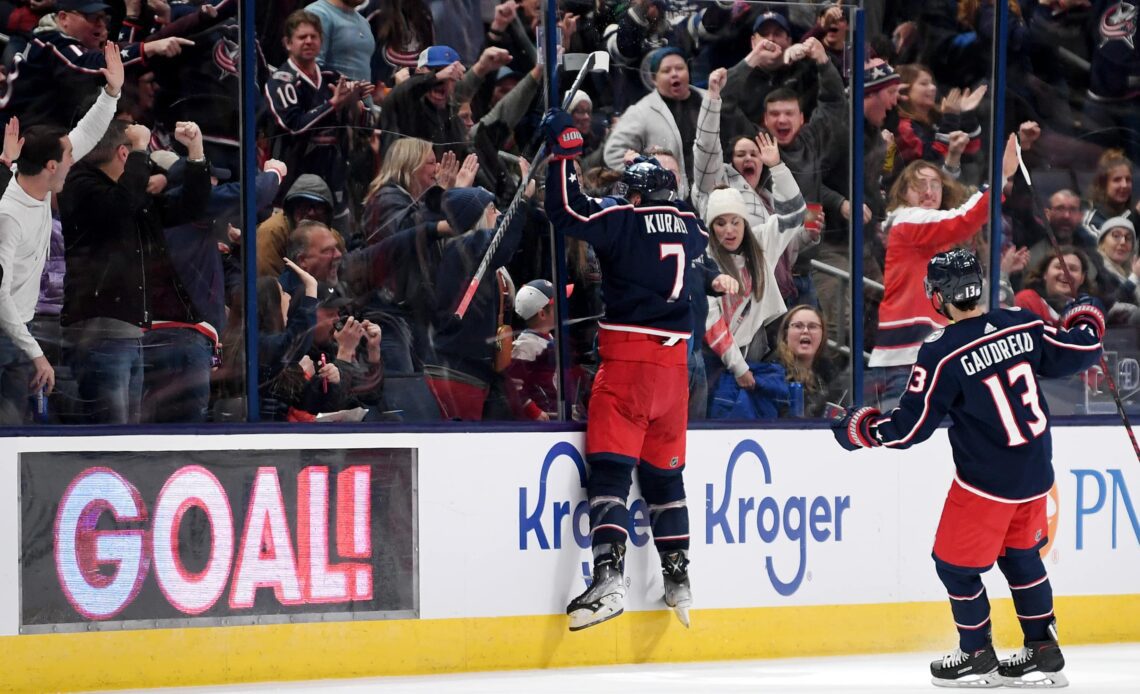 Boone Jenner and Mathieu Olivier also scored in the third, and Kuraly added an assist. Cole Sillinger and Gus Nyquist added goals for Columbus, which has picked up seven points in its last four games. Joonas Korpisalo stopped 38 shots and won for the third time in four games.

“This wasn’t pretty tonight at all,” Blue Jackets coach Brad Larsen said. “But you have to win ugly in this league at times. I thought Korpi was outstanding.”

Nick Suzuki had a goal and an assist, and Jordan Harris, Josh Anderson and Brendan Gallagher also scored for Montreal, which lost its second straight. Sam Montembeault stopped 23 shots.

Columbus jumped to an early lead on Sillinger’s shot from the left circle that careened off a Canadiens player and into the Montreal net at 7:28 of the first.

Nyquist made it 2-0, scoring on a shot off a pass from Gavin Bayreuther, beating Montembeault at 16:19.

“To me it’s the breakaways more than the goals that were scored on us,” Montreal coach Martin St. Louis said. “Some of the breakaways were self-inflicted. We were careless.

“We were down two, I thought we could have been down five.”

Harris got Montreal within one at 13:35 of the second after multiple turnovers kept the puck in the Columbus zone. Montreal pulled even with Anderson’s power-play goal with 2.1 seconds left in the second period and 12 seconds left in Columbus’ third penalty in just under four minutes.

It was the second straight game in which Columbus gave up a two-goal lead.

Jenner started the third period scoring, giving Columbus the lead at 6:36 off tic-tac-toe passing from Kent Johnson and Johnny Gaudreau. But, Gallagher’s back door shot on Korpisalo at 9:27 made it 3-all.

That lead lasted 42 seconds before Kuraly split defenders and tapped the puck past Montembeault. Olivier made it 5-3 with a one timer off a face-off at 11:09.

“I figured I was going to dump the puck, and I had a little bit of extra juice,” Kuraly said. “I just thought I’d put the puck behind him and see if I have a chance. It worked out tonight.”

Just eight seconds later, Suzuki had Montreal back within a goal. But Kuraly sealed the win with an…