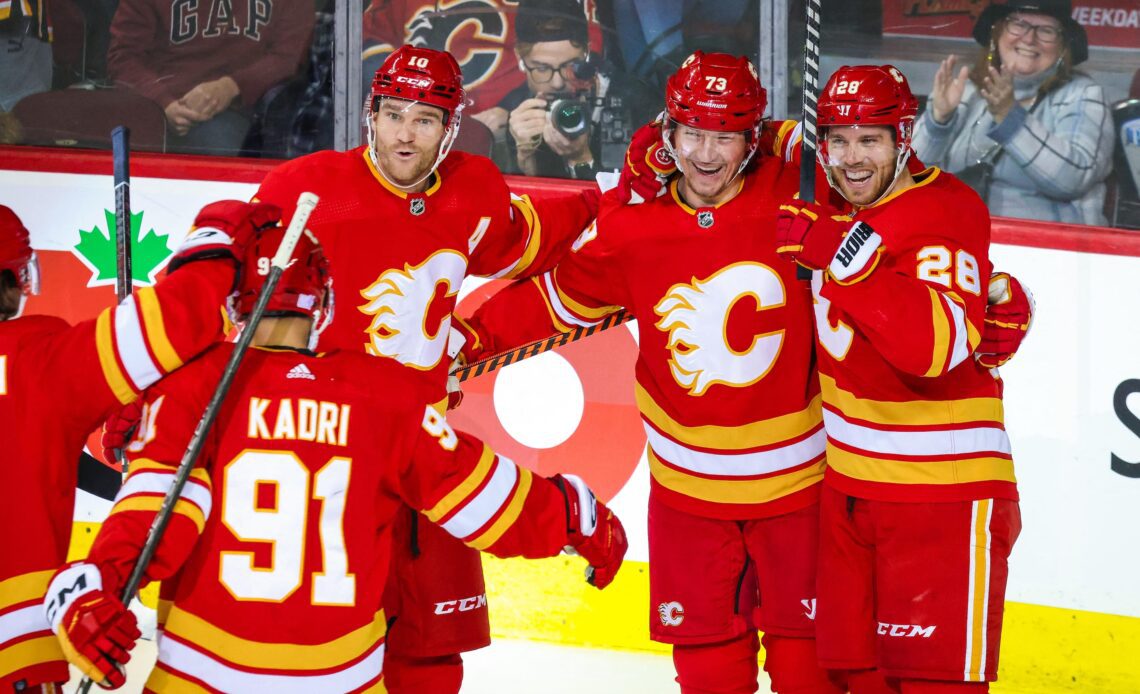 After losing 100-point wingers Johnny Gaudreau and Matthew Tkachuk in the off-season, it has taken a while for Calgary centre Elias Lindholm to find chemistry with new linemates, but it is finally starting to come together.

Lindholm and Tyler Toffoli led the way with a goal and two assists each on Monday as the Flames struck for four goals in the first period and then withstood a furious late push from the visiting Los Angeles Kings to hang on for a 6-5 victory.

“He’s one of the best players in the league and just fortunate to be playing with him,” Toffoli said of Lindholm. “The past week or two I think he’s really took his game to the next level and it’s been fun to play with him.”

Adam Ruzicka, 23, who joined the line after Jonathan Huberdeau went down with an injury, has also fit in nicely.

“It feels good,” Lindholm said. “We’re having fun, making plays and scoring some goals. Obviously, Adam’s come in and he’s a good player. He’s still a young kid, but he’s been playing well.”

Ruzicka’s strong play of late — a goal and an assist on Monday giving him five points in his last four games — helped him keep his spot on the No. 1 line, even after Huberdeau’s return on Monday.

Flames hold on for victory over Kings

“They moved the puck around really well, the three of them together. Adam did a good job of using his size and going to the net,” said Flames assistant coach Ryan Huska. “Certain guys have raised their level and we needed to find a way to win games, and Elias has been one of them and so has Tyler.”

A story line entering the game was how head coach Darryl Sutter had revamped his other three lines to accommodate Huberdeau’s return after a three-game absence.

The changes worked with Calgary getting an even-strength goal from each line in storming out to a 4-2 lead after 20 minutes.

The Kings’ had their four-game winning streak…