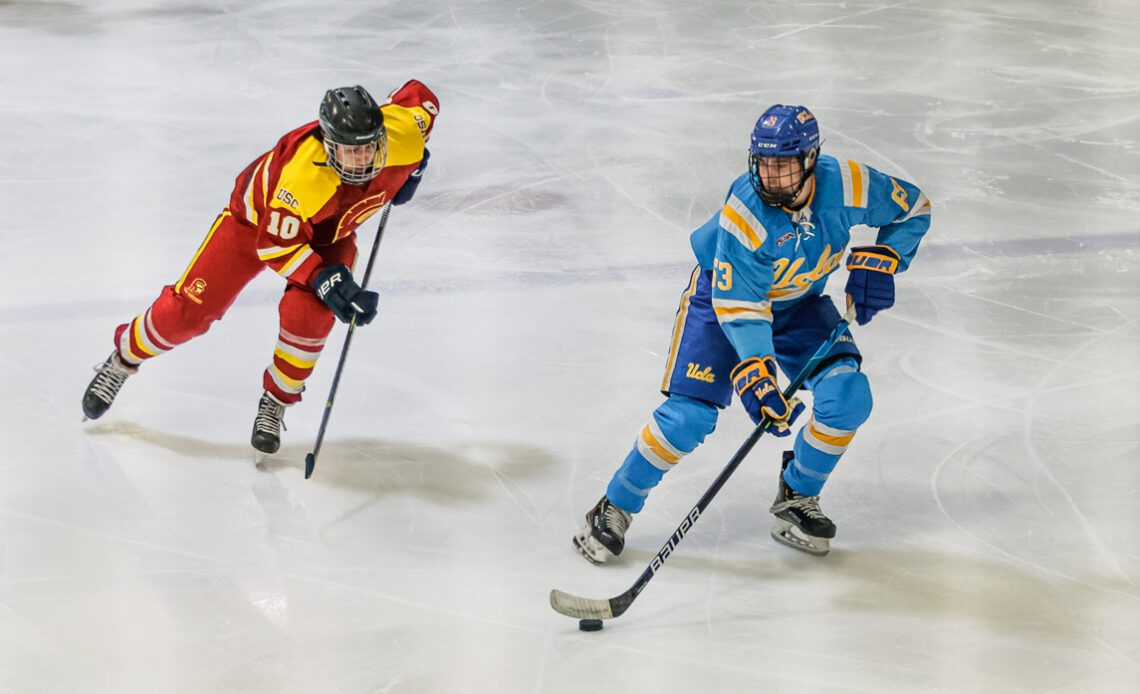 A dish back to Owen Sweeney in the high slot.

And a breath of space between the ice and the goalkeeper’s pad.

One shot past two defenders, through the goalkeeper’s legs and straight into the lower right-hand corner of the net to give the Bruins the advantage at The Cube Ice and Entertainment Center.

“Taking the lead on that goal, it was just electric,” said sophomore forward Sweeney.

Bolstered by the roars of the packed Cube, UCLA club men’s ice hockey defeated USC on Friday night, its third straight victory over its crosstown rival.

The game opened with roughly evenly matched squads, as the blue and gold battled with the cardinal and gold for the offensive zone. A shot by each team followed to no avail until, less than three minutes into play, a pass by senior forward Duke Fishman to junior forward Johnny Ilvento in front of the net gave the Bruins their first goal of the match.

“They played a really good defensive game,” Fishman said. “It was really tight, going down to the wire, but our guys hustled really hard. … I’m really happy with how we played.”

By the midway point of the first period, UCLA’s defensive struggles were no more, with the Bruins dominating the Trojans 16 to 8 in shots through the period. Nevertheless, a breakaway by USC forward Alejandro Escamilla with five minutes left in the period evened the score and secured the Trojans’ first and only goal of the night.

Fishman credited the close first period to the nerves prompted by the large crowd in attendance.

“We had a slow start because we weren’t expecting as big a crowd as we got, which put a little pressure on us,” Fishman said. “Once we got more into the game, … we got the puck, and we started being able to make plays and score.”

A scoreless first half of the second led to unrest from both the players and the audience. As taunts from Bruin and Trojan fans alike lit up the stands, an elbow from sophomore forward Alex Moroz led to USC’s first power play of the night, an opportunity the Trojans were unable to capitalize on.

But the score wouldn’t stay knotted for long.

A pass to junior forward Alex Setteducati left him flying down the ice with a Trojan defending him closely. Setteducati passed back to a wide-open Sweeney, who slashed the puck through two players, past the goalkeeper and into the bottom right corner of the net.

With the goal, the blue and gold took a 2-1 lead in the game – a lead it wouldn’t relinquish.