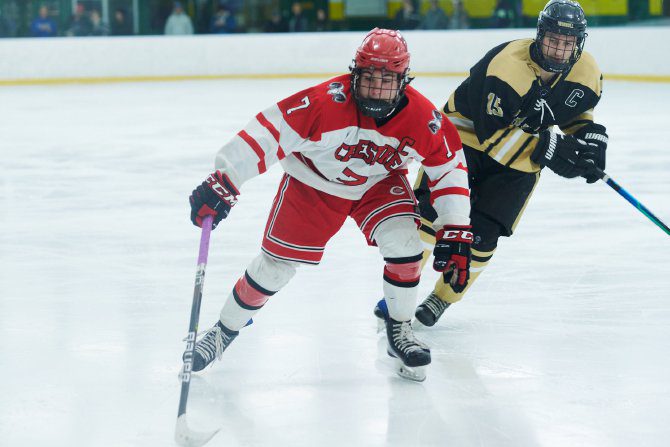 For a long time, Damon Zurolo has felt comfortable inside an ice rink. Through the game of hockey, he discovered a passion for putting the puck in the net and also developed leadership skills.

“I’ve always loved hockey,” said Zurolo, a 2022 Cheshire High School graduate. “I love how fast-paced it is and how you build connections with the guys.”

Zurolo was disappointed to say goodbye to his CHS teammates this year, but after graduating in June, he looks forward to forming new bonds during a post-graduate year at Bridgton Academy in Maine.

Bridgton plays prep and junior teams in the United Tier I Hockey League.

“The coach (Mike Meserve) played high-level hockey and I think he will help my career,” said Zurolo. “Hockey is a difficult sport to play at the next level, so getting to go there is a blessing.”

“It is always nice when players can further their hockey careers,” added Cheshire Head Coach Anthony Giusto. “I know the coach up there (Bridgeton) pretty well. I think Damon will do a nice job for them.”

Zurolo initially planned to play hockey and baseball at Bridgton, but recently decided to just have one activity.

“The sports up there are like a full year (commitment), so I thought that it would be smart to focus on only one,” explained Zurolo, who has grown up looking up to his father as a two-sport athlete. “It is going to stink to not play baseball, but I’m excited to play hockey. I had a great end to my career at Cheshire High School this year.”

At about 8 years old, Zurolo began playing hockey in the Wallingford Hawks program. Next, he played for the Connecticut Wolf Pack.

“It was fun starting out with the Hawks,” recalled Zurolo. “There are a couple kids on our high school team that came from there.”

Zurolo joined the CHS program as a sophomore.

“There was a great group of seniors that year,” stated Zurolo. “I think I’ll be friends with those kids for life.”

“It was really nice,” reflected Zurolo. “I worked hard over the summer and it felt good to contribute in my junior year.”

“I always knew that I wanted to…